Ever wonder why we use the word “cup” in bra sizing? Yes, the cup is being filled, but there’s actually a story, or more of a legend, behind the word.

From the breast bands worn by sporting women of ancient Rome to the bullet bra worn by Patti Page in the 1950’s, or Madonna’s later on, the bra has a rich history, many patents, and stories. Legend has it that the word, “cup,” came into use in Paris. When a young woman auditioned for the Folies Bergère, for the semi-nude dance troupe at the famed music hall, a champagne coupe, as pictured here, was placed over her breast. If the woman’s breast didn’t fit within the glass, she wasn’t hired. 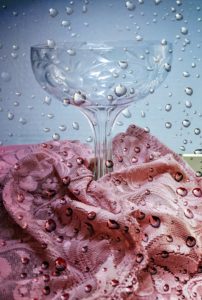 Today, many women have difficulty choosing the correct bra size.  One can find any number of charts and tables to help calculate the correct band and cup combination. Bare Necessities, a bra seller, may have the simplest method: With a measuring tape, measure the band; then softly move the tape across the breasts.

The difference between the two measurements gives the cup size. For example, a 1” difference would be an A, 2” a B, 3” a C, 4” a D, and so on. (The chart is on their site.) Also, in assuring a good fit, it’s important to ensure that the center gore of the bra is flat against the sternum and the side wire or edge of the cup is against the side bone and not resting on breast tissue. Of course, nothing should be digging, pinching, or tugging.